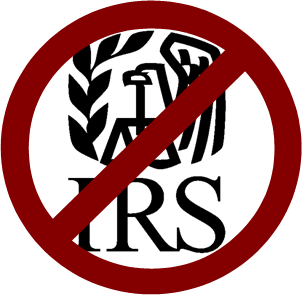 Imagine three of your neighbors come to you and tell you that as a group you are all going to vote on raising $10,000 for a playground. You’re don’t have kids, or they are grown and living on their own, so you vote no.  The other three all have kids, so they vote yes…and demand that you pay your “fair” share or they will beat you up.  They also decide that the more money you have, the more you have to pay.  Since you kids have moved out, you have more disposable income than any of them, so your “fair” share turns out to be half of the cost, or $5000, while each of their fair shares turn out to be about 1/6th of the cost, or about $1666 each. The three neighbors enter your house, find your safe, demand you open it, then they take $5000 from you.  They also demand that you assemble paper work that proves you don’t actually owe even more than the $5000, and give it to them by mid-April. You decide that it’s better to pay the $5000 and show proof that you don’t have to pay even more than to get beat up, so you spend several hours digging through your banking documents, and submit your financial “proof” that you paid enough.

The above scenario is a microcosm of how our tax system works today. The majority voted to take the property of the minority and use it to pay for something the minority didn’t ask for and doesn’t need or want. Our current system is confiscatory, that is, your money is confiscated from you. Worse, as your income goes up, so does the percentage the government (i.e. your neighbors) takes from you.

There are few ways you have of influencing the amount that’s taken from you: You can hide money at the risk of getting beat up by your neighbors and having even more money stolen (i.e. income tax evasion); you can make less money so you have to pay less (lowering your income – at the expense of your quality of life); you might find ways to protect some of your money for now in exchange for paying later (like certain retirement plans); and you might try finding different neighbors who will promise (but fail) to steal less of your money (i.e. elect a different set of politicians). Regardless of whatever trick you use to make the taxes a little less painful, you take it for granted that such a parasitical system is a permanent fixture of life.

It wasn’t always like this, and it doesn’t have to stay this way. The modern income tax didn’t become a constant monkey on the backs of Americans until 1913.  Imagine that: from 1776 until 1913, with a few exceptions, our government managed to function without stealing money from us.  It can be that way again.

What if instead of coercing you to pay for a playground (or any other bit of government) you don’t want, your three neighbors find enough like-minded folks to form a corporation, pitch in some seed money to buy or lease land, get the playground built, then they charge a small access fee to use it? No one forces anyone else or intrudes on their financial life. Government involvement is reduced to providing an enforcement tool for the contracts between the playground company and the builders, and providing routine police protection and emergency response. Government stays small, because it isn’t involved in building facilities or providing services that can and should be offered competitively in the private sector.  Your burden is tiny – your sales taxes pay for contract enforcement, emergency response, and the courts.

This method of raising funds for government is called a consumption tax.  You only pay for what you use, and only for how much of it you use. No one steals your money, and you don’t have to prove anything to anyone about your finances.

There have been various proposals for such a system.  The most comprehensive that I’ve seen is called “The Fair Tax.”  You can learn about it here: https://www.youtube.com/watch?v=DsqjW3_5Lhw

The Fair Tax is not perfect, and it has no shortage of critics.  Most of those critics would lose something if the Fair Tax were enacted.  IRS employees would no longer be required. Tax preparation businesses would become obsolete.  If our tax system wasn’t confiscatory and hideously complicated, there would be no reason for that entire industry to exist. Politicians would lose a lot of power under such a scheme. Regardless, the Fair Tax is a system that does not punish productivity or operate via the threat of force, so it is by default better than what we have now!