In parts I and II, I opined that the U.S. is supposed to be a republic, but that we have become dysfunctional as such, and that people think we are a democracy, but if we adopt true majority rule vs the rule of law, we will descend into dictatorship.  Whether we are a republic or a democracy or a dictatorship speaks to our domestic governance, but what about our foreign relationships?  Some say America is an empire, and we have certainly done things that are imperialistic. But what is an empire, exactly? According to Paul Schroeder, Professor Emeritus of History, and University of Illinois at Urbana-Champaign:

“…empire means political control exercised by one organized political unit over another unit separate from and alien to it. Many factors enter into empire–economics, technology, ideology, religion, above all military strategy and weaponry–but the essential core is political: the possession of final authority by one entity over the vital political decisions of another. This need not mean direct rule exercised by formal occupation and administration; most empires involve informal, indirect rule. But real empire requires that effective final authority, and states can enjoy various forms of superiority or even domination over others without being empires.”

America certainly wields enormous power and influence across the world. We have the most powerful military and the largest economy. We have a military presence in something like 75-80% of the countries, and our Navy and Air Force can hold any target anywhere on the globe at risk. A few words from the president or the Chairman of the Federal Reserve can affect the fortunes of investors the world over.  We have acted imperialistically in many historical cases, but we are not fully an empire yet. The critical distinction is that we do not maintain “final authority” over other polities. In the historical cases where we had such power, we kept it only temporarily. (For example: the Philippines, Japan post WW II, Panama, Iraq.) We may not ever become an empire…unless we do descend into dictatorship. A dictator needs to accumulate power in order to keep accumulating power. An American dictator would have enormous power indeed – certainly enough to enable his or her ambition for empire.

So, to sum up this series of posts: are we a republic, a democracy, or an empire? If the answer eludes you, don’t feel bad. If you asked 100 historians or social scientists, you’d get 100 different answers.  In my opinion, we are stuck between modes of governance, that is, we have a mix of systems, and pressure is building.  “We the people” are supposed to have a republic, with representation in furtherance of protecting our rights; instead we get lip service. Where our votes are supposed to matter, instead corporate lobbyists and issue-based pressure groups buy or bully for the legislation they want and turn America against itself in the doing. Our elected leaders pass laws we don’t want, waste money that isn’t theirs on programs the Constitution doesn’t authorize, and empower armies of bureaucrats to regulate with the force of law. Then they then exempt themselves from their own handiwork. Our Supreme Court to often tries to legislate new rights out of thin air in an effort to achieve “social justice” and ignores the  Constitution, or says it’s a living document and re-interprets it to mean exactly the opposite of what it says. Ayn Rand was prescient when she wrote: “… no one’s interests are safe, everyone’s interests are on a public auction block, and anything goes for anyone who can get away with it. Such a system—or, more precisely, anti-system—breaks up a country into an ever-growing number of enemy camps, into…groups fighting one another for self-preservation in an indeterminate mixture of defense and offense, as the nature of such a jungle demands.”

If it seems like we are the most powerful nation on the planet, but that we are in decline because we can’t get our governmental act together , you are seeing things pretty clearly. 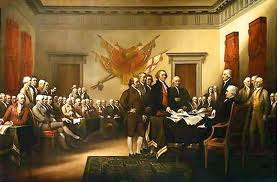 At the close of the Constitutional Convention in 1787, Ben Franklin was asked what kind of government had been created. He replied “A republic, if you can keep it.”   Yet today, you almost never hear people call the U.S. a republic. It’s often called a democracy.  It is also sometimes spoken of as an empire, usually in a derogatory way.  So what are we supposed to have, and what do we actually have?

So, do we Americans conduct our affairs for our own benefit, or for the benefit of a ruling power?  How long do you have to work each year to pay your tax bill? How much paperwork do you have to fill out to file your taxes? Is the NSA spying on you? Can you sell your product without some kind of mandatory labeling to warn idiots not to do something stupid with it? If you decide to home school your kids, or send them to private school, do you still have to pay for your neighbors’ kids’ public schooling? If the local government thinks your house and yard would be put to better use as a shopping mall, will you be able to keep your own property?  Can you conduct any financial affairs without government scrutiny? Can you travel anywhere you like via any mode of transportation you want without having your papers checked and/or your property or your person searched? Are your particular vices allowed or prohibited?  Can you marry whichever mutually consenting adult(s) you’d like? Can a male over 18 NOT register for the draft without consequences?  If you decide to hire candidate X instead of candidate Y, are you going to get into hot water for not supporting affirmative action or diversity goals?  Once that has been settled, can you pay the candidate what the work is worth, or do you have pay them what the government says you must?  Are you obligated to provide a benefit package to boot? Do you have to take a drug test in order to work, so that the government can give some of your money to people who don’t work and couldn’t pass a drug test? Can you keep your insurance plan and /or your doctor this year? Are you in compliance with all of the millions of pages of other laws and regulations our government has levied on us over the last 237 years?

I think we can say, that based on the definition above, we are no longer fully functioning as a republic. To be sure, and for now, we still have many freedoms, including the freedom to write a blog like this one, and many other trappings of a republic, including the ability to vote. But are we truly able to conduct our own affairs for our own benefit?