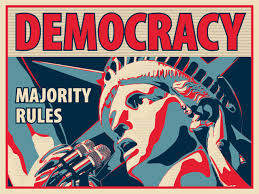 In modern usage, the original meaning of the word “democracy” has been camouflaged. Whereas most folks understand it to mean electing our leaders and having a say in the affairs of our government, that is not what democracy means.  The hard reality is more insidious: the word democracy comes from the Greek word dēmokratiā, which was coined from dēmos (“people”) and kratos (“rule”). Democracy literally means “the peoplerule.”  We interpret that as “majority rule.” That sounds pretty good, right?  Isn’t that what we are supposed to have in America?

“Democracy is two wolves and a sheep voting on what’s for dinner. In a republic, the sheep is well armed and able to contest the vote.” – multiple attributions.

But what if you are not in the majority?  Especially for an issue that has to do with your rights?  Should the majority be able to dispense with your rights just because they are the majority? The founding fathers didn’t think so; through the Constitution, they gave us the rule of law and a republic, not the rule of the majority. Our Constitution is designed to protect our rights – both from the government and from any majority who might wish to “democratically” vote them away. It does so via the techniques of splitting the government into three branches (legislative, executive, judicial) and by placing various checks and balances against them. For example, we elect our leaders, but they can’t legally impose any law on us that violates the Constitution. To make those laws requires great effort. First, both sides of Congress can pass proposed legislation, i.e. bills, by a simple majority vote, but they don’t become law unless the president signs.  If the president vetoes a bill, Congress can try again, but it takes a two-thirds majority to overcome the veto.  Meanwhile, if a law comes into dispute, the Supreme Court can rule it unconstitutional and order it struck down. In our system, the people are supposed to get their say by electing their representatives; the people don’t get a direct vote on legislation, and neither “we the people” nor our elected representatives can legally bypass the structures and processes our Constitution imposes on the government. Thus, we are supposed to have the rule of law, not a democracy (in the strict sense of the word).  In fact, believe it or not, the word “democracy” does not appear in either the Constitution or the Declaration of Independence! But  why shouldn’t we have a democracy? I’ll let historian Alexander Frazier Tyler explain:

“A democracy cannot exist as a permanent form of government. It can only exist until the voters discover that they can vote themselves money from the public treasury. From that moment on, the majority always votes for the candidates promising the most benefits from the public treasury with the result that a democracy always collapses over loose fiscal policies, always followed by a dictatorship. The average age of the world’s greatest civilizations has been 200 years.”

Well, judging by the state of 237-year-old America today, it looks to me like the republic is giving way to democracy, but the transition is not complete, nor assured. Will we complete the transition and give in to dictatorship, or will “we the people” restore the republic?