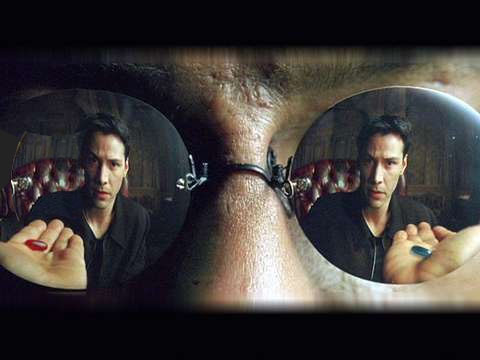 In the 1999 movie “The Matrix,” the future is presented as a dystopia where the vast majority of human beings are caged in pods that capture their body heat to energize a vast, governing machine intelligence.  In order to keep people in such a state, the machines created a virtual reality and plugged the brains of the human “batteries” directly into it – this constructed reality is the eponymous Matrix.

There are a few human rebels who escaped the machines, fighting an almost hopeless battle against them. These rebels are able to plug themselves back into the Matrix with full awareness of its virtual nature, and work to free the rare human “battery” who has begun to suspect the Matrix is not reality.  In the process of freeing such a mind, the leader of the extraction team confronts the skeptical person within the Matrix, hints at the truth, then offers the candidate two pills, one red, the other blue.  If the candidate takes the blue pill, he will remain trapped in the Matrix.  If he takes the red, he will be unplugged, rescued from his pod, and shown the true nature of reality.

There are some people today who believe we are living in a Matrix.  I don’t subscribe to that at all, but I do believe nearly all of our society’s ills can be attributed to a conflict between two philosophical meta-traditions, with schools of thought that promote collectivism & altruism on one side; and the philosophies of  individualism & reason on the other.  The traditions of collectivism & altruism have some Matrix-like qualities.

“Children who know how to think for themselves spoil the harmony of the collective society which is coming where everyone is interdependent.” ― John Dewy, hero of progressive education.

Like the machines in the Matrix, the elite of these traditions would prefer their subjects remain ignorant of the true nature of things, i.e. to take the metaphorical blue pill.  Creating critical thinkers is not a goal for the education of the masses in systems dependent on these models; nor is it a priority for the media to expose truths that contradict the narratives of the anointed elite.  But unlike the “batteries” of the Matrix, We the People are not trapped in energy-sucking pods. Metaphorical red pills can be found.

Promoters and adherents of philosophies of individualism and reason are, like the rebels in the Matrix movies, very much a minority who see things much closer to the way they truly are. A thinking, reasoning mind is valued among such rebels, skeptics, and extremists, but represents a threat to the purveyors of the blue pill.

“To fill the young of the species with knowledge and awaken their intelligence… Nothing could be further from the truth. The aim… is simply to reduce as many individuals as possible to the same level, to breed and train a standardized citizenry, to put down dissent and originality. That is its aim in the United States… and that is its aim everywhere else.” – H.L. Mencken, journalist and author

The conflict between “blue” and “red” thinking has been with us since humans first started using tools to make tools – probably as far back as the invention of the wheel.  Blue thinking started with superstitions and pagan religions.  It has always had the advantage of being easier to sell and easier to believe in, so it has always flourished in some form or fashion, while red thinking has always required intellectual rigor, which meant it was not preferred by people looking for the path of least resistance. In fact, ours was the first nation to be founded on the principles of individual liberty and capitalism – i.e. The United States of America is the original red state!